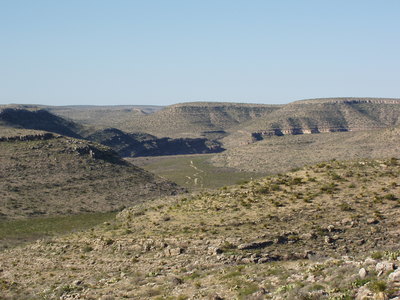 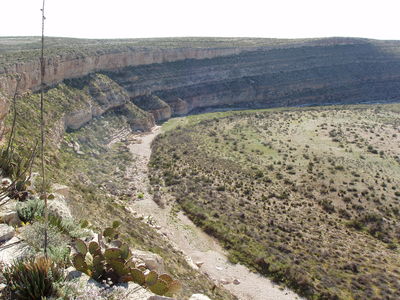 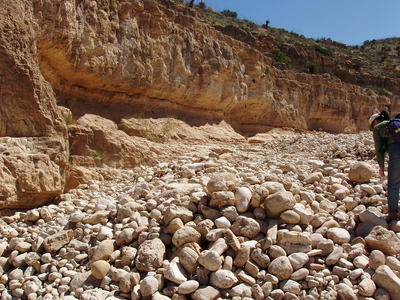 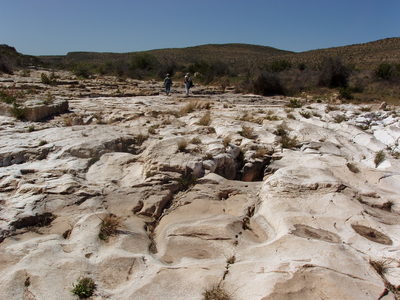 Cut deeply into surrounding plateau country is a large, dry canyon.  More than a hundred square miles (400 square kilometers) of mountainous desert shed their rain through this canyon during rare floods.  Within the broad canyon floor is an active channel that carries most of that flood water.  Through much of its length this active channel bed is covered with rounded boulders, about the size of bowling balls.  Elsewhere, the bed is bare limestone bedrock, with some eroded rock mounds and pits several feet deep.  The rest of the canyon floor, outside the active channel, has soil cover with grasses and brush.  Canyon walls are generally steep, climbable slopes, but there are nearly vertical cliffs where the active channel runs right up against the canyon wall.
Dimensions   Active channel widths commonly exceed 30 yards (30 m), while the width of the full Canyon floor is 1000-1500 feet (300-450 m).  The canyon walls are about 400 feet (130 m) high. 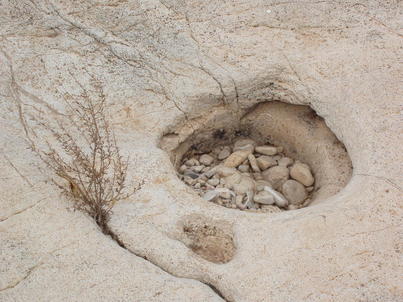 Dark Canyon, Eddy Co., New Mexico.  There is a public road that traces part of the canyon floor, but the land beyond the road, including the active channel, is a checkerboard patchwork of private, state-deeded, and Bureau of Land Management properties.  Only the BLM land allows access to the public, and even that may have fences for livestock control, which should be left undamaged.  Nearby within five miles (8 km) is the much smaller channel of the Desert Streambed Throughway scene, and the same mountain range also hosts the Oasis and Decorated High Gallery scenes.
© Rice-Snows 2017